With le Tour having finished I think it is opportune to dig into a few things I noticed. This won’t be a stage by stage blow by blow, rather – analysis of segments where equipment (potentially) made a critical difference.

As a general comment, it was nice this year not to see continual massive pileups in the first week (the loss of Contador was a blow) – the drama has come from hard racing and close finishes. It’s the close finishes that I’m most interested in analysing…

Strava is great for getting information about what is happening in races. In this case we have several athletes from the top 10 with posted rides. Theuns in 5th shows the benefit of positioning well with a low 613w for the last km (it would have been much higher just at the end) on a hard approach (have a look at the elevation map on Strava).

Despite this, Dimension Data tells us that Greipel hit just over 62kph in the finale and lost by 6 milliseconds.

As usual, I have watched the video to extract key features of the finish. Greipel hit the wind 11s from the line and Cavendish came off his wheel with 6s to go. So we’ll look at the last six seconds, once they were going head to head. Obviously – to come off the wheel Cavendish covered ~2m further in that time than Greipel.

It’s not good news for Greipel, the difference in a 6s 100m drag race between an S5 and Noah SL is 66cm. Or 0.03s. Quite a lot more than the handful of cm or 0.006s he lost by. Even if we allow for Cavendish not using the Cervelo S5 bars (that were included in the Tour test), there is still a 50cm advantage from his frame.

This is a sufficiently large advantage that there can be little doubt that equipment played a critical role in determining the winner of the stage. Cavendish had a tactical advantage coming off Greipels wheel but it would have been little use had Greipel hit the line just a little earlier.

Stage 4: Another uphill sprint in Limoges

Obviously a margin that slim (in favour of Kittel, nearest the camera) is ripe for analysis. Strava again shows some interesting data for the last 200m. It’s over slightly less distance than that in which Coquard launched his run for the line. And missed the win by 28mm.

This sprint was ideal for Coquard – the hill was sufficiently steep that his power to weight ratio counted for a lot more than a flat finish – where power to drag is everything. Unfortunately the equipment comparison is a sad story for him.

Tour Magazin also tested the BH G6 Pro that Coquard rides. Over a 175m, 5% gradient sprint it gives away 0.09s or roughly 1.36m to a Specialized Venge Vias. Again significantly more than the 28mm he lost by.

It’s worth noting that Kittel doesn’t use the semi-integrated Venge Vias bars, instead opting for Zipp stem with FSA Alloy round bars for greater stiffness. In doing so he gave away ~30cm (based on usual testing values for aero road bars). Not quite enough of a hindrance from Coquards point of view.

Actually slightly downhill over the last km. The difference from 1st to 2nd isn’t the interesting part of this stage as the Venge Vias is more aero than the Cervelo S5 in that scenario. So Cavendish was the superior sprinter. 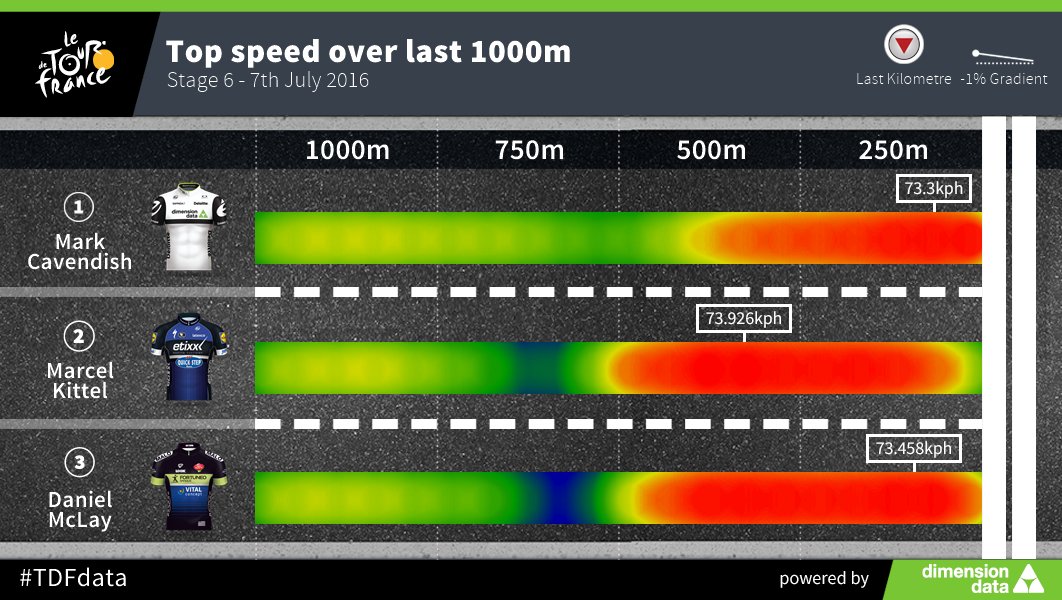 It shows that Cavendish produced his top speed right before the line, the other two actually hit higher top speeds but had lost a bit of speed around 600m to go (the blue bits) which mean’t they burned their matches too early. Cavendish delivered a master class in how to win a sprint.

Wellington born Dan McLay (who unfortunately is racing under a UK license) did extremely well in his first tour – showing great skill in being on Cavs wheel in the final. Could his bike have made a critical difference? 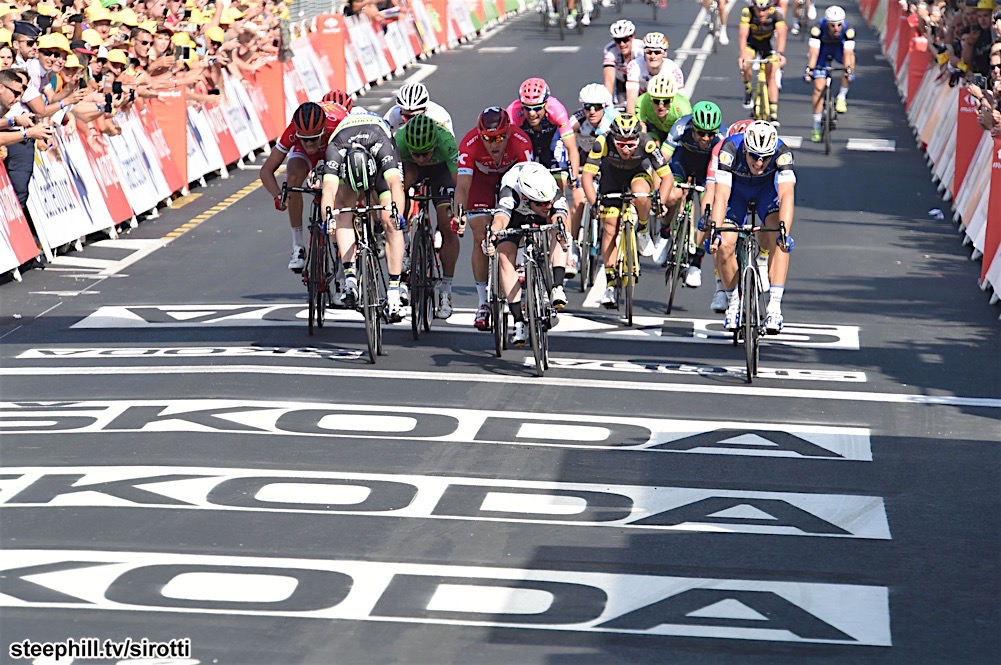 Unfortunately the Tour Magazin data is for the Look 795 Aerolight and McLay is on the 795 Light which features normal brakes so will be fractionally worse aerodynamically.

Mclay popped out from behind Cavendish with ~60m to go, pushing to a close finish at the line (I can’t find data for the actual gap).

Comparing the Look 795 Aerolight to the Cervelo S5 in that scenario yields a difference of 13cm. Which would probably get him past Kittel, but not to Cavendish. It would have made it a bit more interesting though, especially if we factor the above mentioned penalty for exposed calipers.

Sprints decided at over 60kph are clear opportunities for equipment gains, but what about a short climb suited to Classics riders?

Strava shows us power data for Wilco Kelderman (Lotto NL Jumbo – Team leader for Kiwi George Bennett) who output 7.5w/kg on the final climb to finish sixth. He averaged 33.2kph over the climb, placing it firmly in the zone where aero matters more than low weight (though at this level you want both) for equipment.

The win was contested by Peter Sagan and Julian Alaphilippe – Sagan heavier by 15kg (77kg to 62kg) so clearly put out far more power (“the answer is more power, I don’t care what the question is” – Tim Allen on Tool Time). Did Sagans choice of a Specialized Venge Vias make a material difference compared to Alaphilippes Specialized Tarmac?

According to Dimension Data Sagan hit 40.8kph in the sprint (25.5mph) – that speed tells us that aero was potentially an important factor.

The hill did make this sprint interesting tactically. If you watch the video above from ~45s in you’ll see that Sagan pops out with 30s to go, ducks behind Alaphilippe at 12s to go to marshall his resources for the final sprint at 6s to go. Alaphillipe follows Sagan until 15s to go then launches. If we were comparing two equal riders, the tactics Alaphilippe used would have netted the win by half a wheel – he saved much more energy than Sagan did.

Unfortunately his deployment of resources was far outweighed by poor choice in bikes. Using Specializeds own data comparing the Tarmac to the Venge Vias he gave up 2.5m just in the last 150m dash to the line (once Sagan had popped out to go head to head).

I rather suspect that he’d have liked an extra 2.5m…

In this case it’s not a matter of being provided an inferior bike by the sponsor. Alaphilippe has access to exactly the same bike as Sagan, but has bought into the low weight/comfort story of round tubed bikes. To his detriment.

Despite the additional weight of the Venge Vias (they’re not light!) may have given Sagan a race winning margin, even without considering that he was saving energy through the entire stage – not just in the last 30s.

Note the ‘may have given’ above – I’m not aware of studies on the airflow disruption caused by throwing the bike around in a sprint, so the real world effect may be slightly different from the theory. However, comparisons of tunnel results to real world have consistently shown that faster bikes are always faster. And I’d surmise that a bike designed to manage airflow (like the Venge) may even have a larger advantage than the theoretical when put into a messy air situation like sprinting.

We’ve seen a lot of convergence in aero road bike design in the last few years – there are now several brands with really fast bikes (instead of just one). It’s noteworthy that Sagan and Cavendish being on significantly better bikes (Venge Vias and S5 vs original Venge) this year were a lot more successful than in 2015. Kittel changing to the Venge Vias only yielded a very slight advantage over his Giant Propel of last year, so he did not fare as well in the arms race comparatively.

Cavendish proved on two stages that he was the best sprinter of the tour – Stage one was a convincing display, marginal gains didn’t come into it. And Stage six he beat an opponent with faster equipment in a straight drag race.

But there are three athletes who could have had quite different outcomes from the tour (and thus for their income) with different equipment. At the top level of the sport – small differences make all the difference!